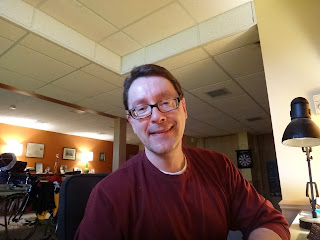 Freshly showered and cologned for Mothers' Day 2020, though not shaven.  Hey, it's still the weekend.
Well, after almost nine weeks since my last visit to the stylist for a haircut, I finally gave up the ghost and decided to do something about it since I was beginning to look decidedly shaggy, and said stylist's salon won't be open again until the end of May.  At the earliest.  Late Saturday afternoon, I threw caution to the wind, fired up the recently purchased Wahl Color Pro trimmer, and went to work.
This was on the heels of watching many, many how-to videos from the last couple of years on YouTube.  I played it safe and used the #8 guard (slightly longer then 1") plus the tapered right and left guards for around the ears and temples.  The Grand Duchess used my small, battery operated trimmer to clean up the nape of my neck and hairline there.  It won't win any awards, but it's about on a par with the cuts I got during my fascination with traditional barbershops (Fall '15-Spring '19).  At least I managed not to come out looking like Douglas Niedermeyer, ROTC.  "What's that??!!  A pledge pin on your uniform??!!"
By the way, the photo was taken in my basement office, or as I refer to it Zum Stollenkeller, where I and The Young Master spend a goodly amount of our waking hours.  He also has a small desk and play area in the far corner by the steps behind me.  I'm at the built-in table where I paint my model soldiers from the War of Austrian Succession and Seven Years War eras in the mid-18th century.  I know. I know.   I can hear the collective chorus of derision.  "What??!!  He's already an overly educated, insufferable, elitist snob, and now he admits to painting and collecting toy soldiers?  String him up!  Tie that scurvy dog to the yardarm!"
I am so ashamed.
--Heinz-Ulrich