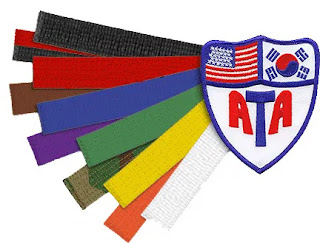 Hurrah!!!  The Young Master just passed the test for his green belt in Tae Kwon Do about 30 minutes ago via Zoom.  Once again, I am just bowled over by his determination.  Since The Grand Duchess is usually the one who gets our son set up each afternoon and Saturday mornings with the computer, and often supervises from nearby, much of this was new to me.
I have not really witnessed him in action since the last belt test at the end of February.  His increase in skill, coordination, focus, speed, and form in just a little over two months is head spinning.  He has practiced six days a week for 1-2 hours a day since the end of March when everything went into lock-down mode, so I shouldn't be surprised, and he has indicated that he wants to help teach the martial art once he turns 14.
That's just 3.5 years away, by which time I expect he'll have his black belt, or be just about there.  Anyway, we pick up the belt in a drive-by ceremony early Sunday afternoon.  Wow.  Just wow.
--Heinz-Ulrich