Another Habit to Cultivate in 2021 and Beyond? 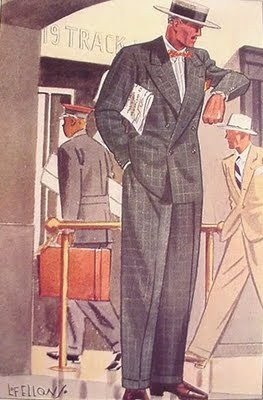 One more of the many Laurence Fellows illustrations I've collected online for the last eight or nine years.  I am not sure which year of Apparel Arts this one comes from, but I call it 'At the Station.'

Another personal habit to cultivate routinely from January 2021?  Watching your weight  Not necessarily because anyone tells you to, but because a healthy weight and body mass index are better for us in the long term.  Especially after 40 or 50.

But there is nothing quite like watching the pounds come off over several months, or suddenly realizing that your clothes fit more comfortably around the middle, across the seat, stomach, and chest.  It's also nice being able to put on socks more easily in a sitting position.  And when you notice, glancing in the mirror while shaving that, there is less of you overall.  What a shot to the mental arm!

Now, I enjoy ample portions of good food as much as the next person, and there are even a few processed snack foods that I could eat by the bagful.  Chili dogs and grilled bratwursts with lots of coarse-ground German mustard?  I'm there.  If we are honest, however, it's probably better to eat stuff like that less often.  And less of it when we do indulge.  Much healthier simply to say no thanks and have an apple, orange, banana, or a small bunch of grapes instead.

How did we get here?  Well, my wife The Grand Duchess is a dab hand in the kitchen when it comes to various Thai curries, Indian, Persian, and Middle Eastern dishes.  With things that good rolling out of the kitchen, it's far too easy to eat more than one should at an evening meal.  Second and sometimes third helpings -- abject gluttony -- are not kind to the waistline over several years.  Neither are peanut butter and jelly sandwiches, my personal lunchtime favorite since childhood although I haven't eaten one since September.

Likewise, since our son arrived in October 2009, it has been well nigh impossible to continue cycling together like we did in those now far off days of being relatively carefree young marrieds, who could easily fit in the time needed for 100 or even 200 miles a week in the bike saddle between late March and late October each year.  Obviously, that degree of exercise kept us very trim along with some occasional cross-country skiing in the winter months, snow permitting.

In any case, it became clear to me over time that I was looking a little, well, solid, and taking off 20 pounds seemed like the answer.  That is a goal I have wanted to attempt for a long time, but have not managed to achieve before now.  I won't go so far as to say everyone else should do the same, but there is no denying that I feel better both physically and mentally.

Today, I not only met but slightly surpassed that self-imposed goal to lose those 20 pounds, set at the end of September 2020 when I weighed in at 184.8.  Following my usual brisk walk this morning, I weighed in at 164.4lbs. on my trusty digital scale ( I am 5'11" tall).  The next goal is to get to 160.0 pounds, which is what I weighed when I had a medical exam in August 1999 prior to my Fulbright year in Norway.  I still weighed that when I met The Grand Duchess after returning to the U.S. the following year thanks to considerable walking and skiing in the hills and woods outside Trondheim.

Once I take off these last few pounds, it will be a matter of maintaining the new weight through  routine exercise and continued, careful monitoring of the daily caloric intake.  Along with the occasional cheat day, of course, for some ice-cream, birthday cake, or a candy bar as season, occasion, or weakness (in the latter case) dictate.

Best of all, my attire -- casual or more formal -- simply fits and looks better after loosing the aforementioned 20lbs..  There is no other way to put it.  For example, my go to tweed jacket by J. Press (40R) once again fits like it should, without any pulling or buckling anywhere and covers my seat, when buttoned.  It drapes beautifully in other words.  Hallelujah!  I've got a few other Italian suits (double-breasted numbers) that have always been a bit snug, so I'm eager to see how those fit too.

Now, if we could just hurry up with the darn vaccine(s) for Covid-19, so dressing and going into work each morning once again becomes a possibility!  I miss my two or three hours early in the morning at the library cafe catching up on email, grading projects, or doing research over coffee.  I don't know about you, but I had enough of working from home about six months ago.