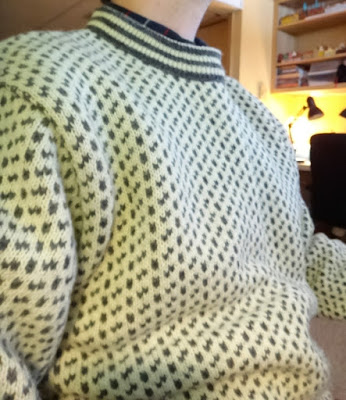 One of the four Norwegian sweaters in my winter rotation.  This particular cream and charcoal number is my favorite.  'For en fin genser!' as they might say in Norway.

Working from home on this snowy, quite cold Friday and ticking off the list of items on the ol' 'To Do' list, including writing and submitting a conference proposal and reviewing an article submission.  And all while supervising The Young Master's online schooling via Zoom to my left.  Definitely not for the faint of heart!

In any case, such days are perfect for a heavy pullover sweater in my view.  While many like Irish sweaters and Fair Isle sweaters, my own preferred variety thereof hails from Norway, the venerable and so called fisherman's sweater.

When I first began traveling to and spending time in the country studying and later visiting archives, now over 3o years ago, you still saw quite a few such sweaters worn on the street, even in 'cosmopolitan' urban centers like Oslo.  By the early 2000s, that had become less usual, although out in the countryside people still wore these.  I'd be interested to see how things have changed now after 20 years away.

At the risk of channeling Madeline Bassett, it's funny how life and priorities change.  At one time, I thought I'd return to Norway for an extended stay at least every couple of years.  Sigh.  But, I may have the kernel of a new research project taking shape in my mind, which might ultimately take me back at some point.

Returning to the subject of today's post, my mother and step-father gave me the first such sweater for my birthday in 1992, and I've picked up three more over the years since, including a second 'back-up' like the one I am wearing today -- ol' Mom always advised getting a second of something you really, really like if at all possible -- one in navy, and a very pretty, heavy Norwegian National Ski Team model by Dale, which was a Christmas gift from Mom and Step-Dad back in 2000.

These various sweaters never fail to draw attention and occasional compliments from passersby when worn away from the house, and I certainly enjoy 'em here at home when the mercury dips well below freezing.  They certainly beat the ubiquitous grubby hooded sweatshirt.

Bernie Sanders and me, eh?