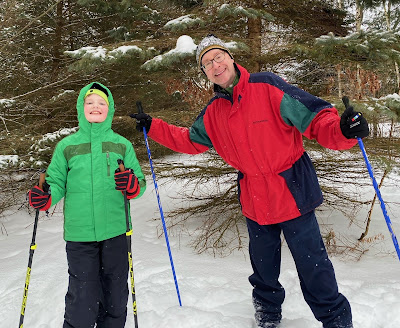 Yet another skiing photograph.  I know, I know.  But we have been having so much fun this winter.  I think it shows here.

Skiing every other day here lately, and occasionally every day, the last few weeks.  This Valentine's Weekend, we've hit the local groomed trails again for a few hours Saturday and again on Sunday.  In a word, glorious!

I have not skied this much since I was last in Norway 20+ years ago, clumsily learning the ropes in the Bymarka (The City Woods) outside of Trondheim.  This is an extensive series of groomed trails, much of it lighted until 10pm or so each evening, through miles and miles of pine and spruce forest that surround the city at higher elevations.

In newly fallen snow, Bymarka really is like a fairyland that would take several years to explore fully.  I miss it, but we're not doing too badly here in Mid-Michigan by any stretch this winter either.  Best of all, The Young Master's skiing technique and stamina seem to grow by leaps and bounds from one tour to the next.  Since he has no school on Monday and Tuesday this coming week, the two of us plan to head out again on both days for a few hours each time.  Sadly, The Grand Duchess has her usual spate of online meetings scheduled, so she will no be able to join us.

But back to our recent weekend skiing.  The last two days, there have been lots of other families with small kids and teenagers as well as groups of adults and single or pairs of more hardcore classic and skate skiers out there.  A hallmark of cross-country skiing in general though is that everyone has been (and is) friendly, kind, patient, and in high spirits.  In more than 20 years of skiing, I have never witnessed a loud episode or ugly, unpleasant scene anywhere I have spent time on the trails or in related nearby amenities.  The cross-country crowd apparently knows how to behave.  Or they are simply too worn out and stress-free at the end of the day to get into scraps with each other.

This weekend, moreover, has been a wonderfully international experience for accidental linguists like my wife and me as well as Young Paul.  Indeed, we have heard Hindi, Japanese, Chinese (Mandarin), and several varieties of Spanish plus the more usual Lower Michiganese out on the trails the last two days, and of course there were our Norwegian and Swedish encounters two or three weeks back.

At the risk of coming across like a Polly Anna, how nice that all of us can enjoy doing the same thing despite whatever differences in skiing ability, political system, or related ways of seeing the world that we bring with us.  Smiles and kind interaction prevail as we cross each others' paths in the winter cold and snow.  What a very special thing that is.

July 03, 2021
C aught up outside (all day) yesterday after about two weeks of heavy rains, which prevented much in the way of yardwork.   The lawn is finally bouncing back after several hasty, ragged wet cuts.   Today will see yours truly putting down new mulch among other things.  And preparing our annual 4th of July dinner with a twist of Central North Carolina where my family hails from originally: pork BBQ, red slaw, and hush puppies. We also drink iced tea that has been steeped with mint from our back yard, sweetened of course.   The pork shoulder needs to cook over indirect heat on a grill outside for six hours or more, so it's an all day affair monitoring progress, feeding charcoal briquets to the glowing coals, and basting with an apple cider vinegar-course ground black pepper mix.  I usually do this in and around other tasks like chopping and mixing the slaw along with yardwork outside.   Delicious food, but not kind to the waistline!  So, we do this just a few times a summer and free
Post a Comment
Read more