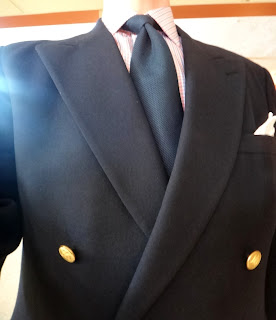 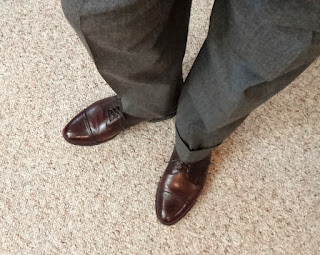 The attire chosen for today's online office hour and later meeting.  I have not donned this particular combination of items, the blazer and pants routinely hang together on one hanger, since before mid-March last year when we suddenly found ourselves in lock-down, all learning was suddenly shifted to an online mode of delivery, and the majority of my waking hours began to be spent at home.

Like many others, there was less occasion to dress along traditional lines for work.  Most days, in cooler weather during the academic year from September through the end of April here in the U.S. at least, it is either a Rugby top or long-sleeved flannel shirt (tucked in with a belt) and corduroy jeans in one color or another with suede camp moccasins.

However, I still make the effort two or three times a week to dress for online Zoom meetings with students and colleagues.  And you know what?  I enjoy doing so, damn it!  Dressing presentably really does pick up one's spirits in a way that more casual clothing simply cannot.  It certainly puts an added spring to my step for several hours on either side of such meetings online.

But back to the combination of items for today.  After so long, I'm terribly pleased with both the look and fit of this particular double-breasted blazer and gray flannel pants, worn here with silk navy and paisley braces since I've lost about two inches around my waist since last September.

Wearing a belt with pants that are now slightly roomy results in buckling material around the waist, which is slightly uncomfortable.  Braces have the added benefit of keeping your pants where that ought to be all day rather than unsightly drooping or sagging around the rear end and hips along with constantly hitching up the offending garments.

There is nothing quite like putting on clothes you have not worn for more than six months, and everything fits and drapes better than it ever has.  The recent weight loss has meant that shirts once again have ample room across the shoulders and chests, collars are much more comfortable when buttoned and worn with a necktie, and pants/trousers no longer pull across the seat.  Jackets and suit coats too hang like they should with no gapping at the vents since there is less of, well, one's seat.

Best of all, I managed to squeeze in a little over an hour on my skis this afternoon.  The trails were a bit on the icy side and need to be regroomed, but the sun was bright, the air and snow temperatures cold, and I had the place to myself, seeing only one other skier during my two circuits around one network of the marked trails.  I came home tired, relaxed, and content (though not overly winded) in a way that only intense physical exercise can achieve.