The Attire for Tuesday. . . 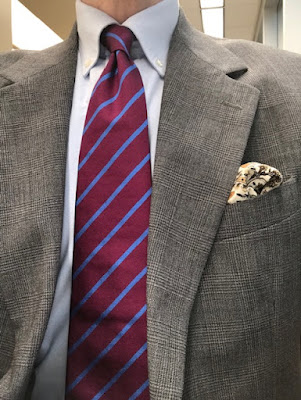 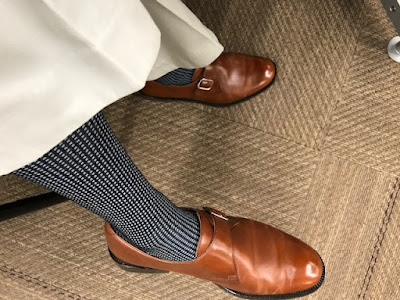 None of the items featured today have seen the light of day in quite a few months save for the Land's End Hyde Park oxford cloth button-down collar shirt which is in the rotation year round.  At least in more temperate weather between late September and the end of May each year.

The necktie, an old Land's End number that purports to the the regimental stripe of Britain's Royal Welsh Fusiliers (ex-23rd Regiment of Foot), hasn't had a wearing in I don't know how long.  It remains one of my favorites however.  The problem is that the ol' necktie collection has grown exponentially -- Let's call it a guilty pleasure. -- in the last dozen years or so, which makes it a challenge to sport favored items more than a few times a semester.

I suppose that there are a few I could donate to Good Will at this point given the infrequency with which they are worn.  The problem is in deciding which ones to weed out.

Land's End used to sell quality neckties at reasonable prices for the budget-minded guy assembling a professional wardrobe, which I was during the early 2000s in my first teaching job after graduate school.  At the time, it dawned on me that I would need a bit more besides a blazer, a tweed jacket, a couple of pair of khakis, a few ties, and two pairs of tasseled loafers (I know, I know!).  This particular tie is hand sewn and made in the U.S. from imported silk, according to its label, and always knots wonderfully the first time.

Not sure of the quality of the few neckties still on offer from Land's End in 2022 (their print catalogs feature far fewer than 18-20 years ago), but given the disappointing quality of the final few items I purchased five or six years ago, not to mention the company's current focus on stretchy, synthetic-laced, shapeless "comfort" wear for the constant snackers out there, I wouldn't recommend purchasing even business casual gear from LE now.

But a bunch of decent workhorse Land's End items from about 2003-2004 remain in the rotation, have withstood the rigors of academia for quite some time now, and they continue to serve me well regardless of the season.

For anyone who might wonder, and since I rarely photograph myself standing up, I prefer an angled medium break on my suit pants and odd trousers with the rear of the cuff starting just above the heel of my dress shoes and a single break across the vamp in front.  No break, to my mind, strays into Peewee Herman territory (And you know what he was arrested for!), while a full break, as much as I like the idea in theory, always looks sloppy.

An angled medium break is a solid compromise.