Make it a double-breasted Tuesday. . . 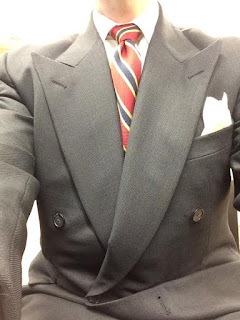 The upper half early this morning.  Although it could stand an inch taken in along the back/sides, the 6x2 coat fits more nicely than it appears here, but I was, of course, sitting and holding my stupid phone out in front of me and down low to avoid including my tired, middle-aged face in the shot.  The wool suit is medium weight and features a really nice nailhead finish. 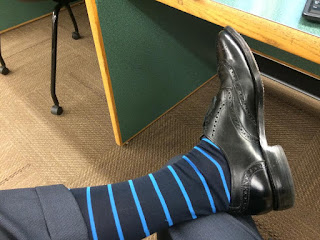 And the lower half.  I always give my shoes a once over with the horsehair brush before putting them on, but I think it's time for a bit of TLC, and this pair of shoes has not had it since sometime late last winter, or early spring.  I wore some navy braces in lieu of a belt by the way.

I decided to wear the faux Drones (Brooks Bros. Makers) necktie this morning with a navy double-breasted number I haven't worn since last spring.  Hmmm. . .  Not horrible, but I should have kept it simple and gone with plain navy or charcoal wool socks instead of stripes.  And the shoes could use some leather lotion, a new coat or two of polish, and sole dressing if we are honest.  Grumble, grumble, grumble.

On another note, a young man in one of my classes today wore a single-breasted gray suit with double monk strap shoes (without socks it turned out) and a white shirt with French cuffs and cufflinks no less.  His skateboard kind of spoiled an otherwise nice look, but you've got to hand it to the guy for making the effort regardless of the reason behind it.