As Comfortable As Pajamas. . . 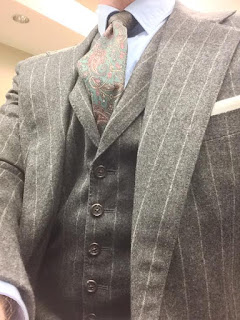 The upper half for today.  A Made in the U.S.A. three-piece wool flannel chalk stripe number from Polo Ralph Lauren and sold by Mark Shale.  The necktie is a hand-sewn Robert Talbot. 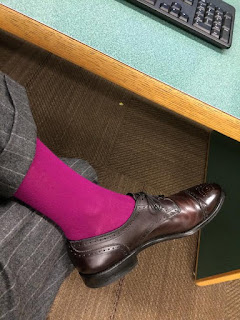 And, as always, the bottom half.  I was fresh out of navy and charcoal wool socks, so I went with these, which kind of echo one of the colors in the necktie above.  As usual, I opted for braces instead of a belt with the pants, which have brace buttons along the inside of the waistband.

Today's suit was purchased for between US$5.99-7.99 a year or so ago from one of my old thrift/charity haunts back in Central Illinois.  As far as I could tell at the time, it had been worn maybe once, if ever, before finding its way to the thrift shop, and required no alterations at all.  Even the coat sleeves were short enough to allow some shirt cuff to show with my arms at my sides.  And absolutely no wear on the seat of the pants, elbows of the coat, or anywhere else.  The suit fits as though it were made for my body, and the cut of the suit resembles those wonderful Laurence Fellows illustrations of the 1930s.  So, I have a delightfully vintage appearance when I venture out in this one.  Easily, one of my best thriting finds ever along with that J. Press tweed jacket.

Best of all, this particular suit, because of its flannel nap is as comfortable and warm on a blustery day as any pair of cruddy sweatpants or pajama bottoms.  And a lot better looking too.