Playful Irreverence for a Pre-Thanksgiving Wednesday. . . 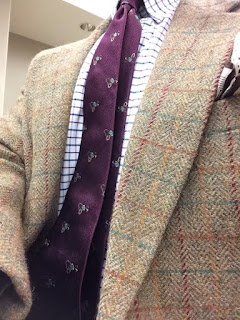 The upper half, featuring my other Harris Tweed jacket sold at one time by Land's End.  American made and not as boxy as some of their jackets became by the early 2000s.  I used to own several and gradually donated them to thrift/charity shops as I acquired nicer blazers and sports jackets. 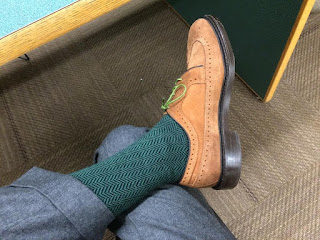 And the lower half, featuring dark green and navy herringbone socks in Merino wool by Dapper Classics (yet again), charcoal wool flannel pants, and those Allen Edmonds 'Schautal' suede wintips/brogues.  Most of the snow is gone from our sidewalks and walkways on campus, and the sun is out today, so. . .  I'm also wearing a newly acquired chocolate suede belt by Allen Edmonds, another gift received for my most recent 29th birthday.

Yet more playful experimentation with different items of clothing and accessories here today.  One of my more visually appealing combinations lately I think.  Happy Thanksgiving to visitors from Classic Style for the Average Guy to visitors from the UNited States.