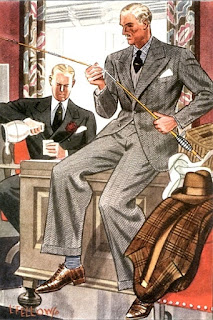 With a nod to traditional business formality, what a shame that the collective office in most cases has been reduced to the level of business casual, or, for those few environments where suits are still the expected norm, simply to 50 shades of boxy gray.  Or if you're lucky, navy.  There might be some commentary there, but who knows?


Just a few random thoughts bouncing around the ol' noggin this wintry Friday morning in April here in Mid-Michigan:

To begin with, and in response to a recent post on a well-known clothing and style website -- that I look at less and less given its increased emphasis on so called dad style, workwear, and Duck Dynasty or Alaskan Bush People beards -- sneakers, trainers, or athletic shoes, call them what you will -- are not exactly stylish.  Readily available? Relatively affordable?  Utilitarian?  Comfortable?  Um, sure.

While the notion of comfort (together with constant snacking) seems to be our national obsession here in the United States (and you thought is was baseball), there are other options for non-athletic activities if comfort is your soul concern and criteria for footwear.  I would definitely not put them on, sneakers that is, outside of the gym unless heading out for an early morning or evening run though.  The only exception might be Converse Chuck Taylor canvas high-tops in a bright color.  Maybe.
------------

On that note, it's official.  I am completely out of step with the times and society in which we live.  But you have suspected as much for a long time, haven't you?  In any case, I simply cannot fathom the notion of a company culture, implied or written down in some three-ring handbook issued to new hires, where "dressing down" for business Monday through Friday is the expected norm.  Times and standards change, sure, but this is one thing that I just don't understand.  It strikes me that the idea of the casual workplace is not a perk, but rather a false bill of goods that society has mistakenly swallowed hook, line, and sinker in our ongoing haste to reduce absolutely everything to the lowest common and readily accessible denominator.

My own view is that being too relaxed while in the office leads to slack, sloppy, substandard work with corners cut whenever the team leader -- Are words like 'boss' or 'supervisor' used anywhere anymore? -- is looking in the other direction.  Of course, this is not to say that every casual workplace or employee in such an office is subject to the tendency to shirk and goof off, but it is nevertheless a discernible issue according to three male friends near my own age, all of whom work in different branches of a giant in the insurance industry.  Here is an interesting piece from 2013 that has some relevance to the various related points that I bring up here.

Suffice to say that I would not do well in today's stubbly, fleecy, frumpy cubicle or noisy open office culture where, often enough, visible body modification is somehow tolerated while items like neckties, sports jackets, and decent looking leather dress shoes raise eyebrows and, sometimes, draw the ire of fellow workers and the powers that be.  With a recent post in mind on another menswear blog that I routinely visit, something is, without doubt, wrong with this picture though I can't quite put my finger on it.
------------

Where what most of us think of as 'style' is concerned, I've been reading a lot lately about the different shoulder expressions that suits and sports jackets can have.  Yet how is it that so many menswear blogs, fashion and style websites, newspaper, or magazine articles of the last decade plus seem obsessed with natural, or even unstructured, shoulders?  Is that part of the casualization of absolutely everything and the export of the American 'sack suit' style?

Does it stem, instead, from clothing manufacturers cutting costs to the bone by reducing the amount of materials that go into each garment while simultaneously pushing these anemic items as the new look?  Is it simply a matter of mass production and manufacturing off the rack garments that will fit most body types without too much trouble?  What exactly is the matter with more structured, even strong shoulders in the British or Roman tailoring traditions anyway?  And where does that cross into oversized, boxy cheap suit territory?
------------

I'll conclude with a response to a recent discussion thread on another lifestyle blog that I read from time to time.  Apparently, there are others besides yours truly who feel that the Vandals, Visigoths, and vulgarians are at the gates where respect for others and related personal conduct is concerned.  Glad I'm not the only one.  It feels like it sometimes.  Anyway, it is very easy to suggest that one simply ignore those who specialize in being ungroomed, gross, or in some other way uncivil and go about one's own life.  Fine.  "Good answer," as contestants used to say on the TV gameshow Family Feud.

The problem is, however, that we are confronted with in-your-face coarseness and boorishness every step of the way whenever we venture online or lower the drawbridge long enough to hitch up the chariot and venture out into the physical hinterlands.  It is a rare exception when you are not.  What a shame that virtues once held in high regard, for example self-control, civility, an aspiration toward self-improvement, and/or upward mobility, have apparently become, in the minds of so many, things to mock, deride, and avoid at all costs. 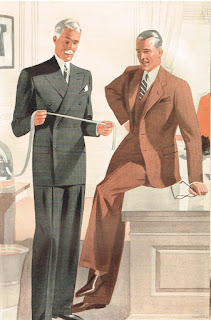 The first of another couple of old menswear illustrations to close today's post.  Of course, the main purpose of these idealized images featured so often here at Classic Style was, let's not forget, to sell clothes.  I can report from my own observation of my father and maternal grandfather for many years, as well as many male relatives, that educated professional men in fact did at one time in the not too distant past dress for work as well as church attendance and special occasions at home.  Quite a few of those family members also dressed with some flair and even panache.  Oddly, there were few, if any, audible complaints about perceived discomfort.  Those invariably came from the various male cousins of my generation who were put into suits and sports jackets with neckties for events like summertime weddings. It's worth noting that if your clothes fit your body, physical discomfort is not an issue although, as I've said before, the issue may be more psychological for many a man in 2018, who finds himself faced with the rare need to "dress up."  It might have helped that the professional orbits of most men in my family were in the Philadelphia, Manhattan, and Washington D.C. areas as well as Richmond, Virginia and one outlier in Saint Louis, Missouri.  Surely, however, they cannot have been the only dozen or so men on the planet who paid attention to the details of what we now term business formal dress.