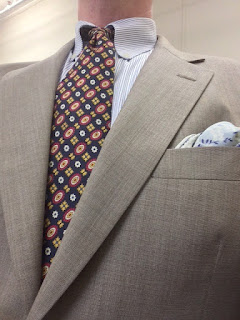 The upper half today.  Suit and tie are Brooks Brothers, the pocket square is from Put This On, and the shirt is a silky, soft number that I purchased from Land's End about 15 years ago.  How much longer can it last without fraying or a small hole developing somewhere?  Time will tell. 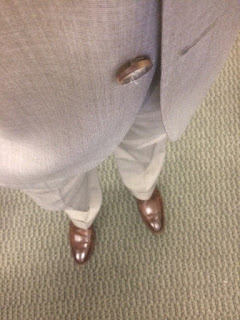 And the lower half, featuring some recently shined Allen Edmonds split toe oxfords.  Not shown are a pair of plain, mid-blue cotton dress socks from Dapper Classics.


Fooling around with the phone for a few minutes earlier this morning as I waited in my office for a couple of students to drop by the last designated office hour this semester.  Yesterday, two different young men in two different courses indicated they desperately needed to talk to me.  Sigh.

It's not unusual by the end of any 15-week semester for panic to strike a certain number of students once they realize -- as advised in my 12+ page syllabi. . .  Yes, 12+ pages!!! -- that they should have taken the course, its material, assignments, and policies much more seriously, much sooner than they did.  As though a last minute conversation will somehow make a difference when there has been no communication and little, if any prior involvement from the students in questions since early January.   There always seem to be six or eight such cases every December and May, but I suppose that's not too bad in light of the numbers I teach each semester, usually 130-150 students across three courses.

By the way, one of the two who assured me he would come by this morning actually made it.  And the second?  Ah, well.

Sadly, today was also the final day of classes for yours truly this semester, so with the exception of a few committee meetings and a conference presentation during the next couple of weeks, the opportunities for donning a jacket and necktie will be relatively few and far between from now until the end of August.  Somehow, a suit and tie seem like overkill for trips to see the dentist, doctor, and ophthalmologist, so I'll stick to the usual penny loafers, khakis, and blazer over a pressed shirt when those particular errands roll around.