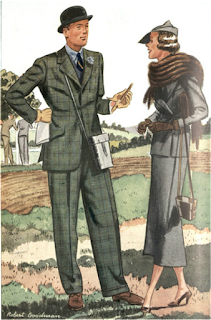 Sure, we don't have to dress up quite like this anymore, but a bit more attention to personal grooming, appearance, and presentation would not hurt either.  Robert Goodman was the artist who produced this particular illustration by the way.


Dressing presentably and reasonably pleasant behavior are not hardships to endure.  Contrary to what many (most?) people in 2019 seem to think.

Times and fashions might change, of course, but is there really any excuse for leaving the house in grungy, food-stained clothing, visibly matted hair, and what I can only conclude must be skid marks up and down the legs of already filthy jeans?  Or have I missed something?  Are purveyors of fast fashion now foisting attire with imitation fecal stains onto the general public?  As the tagline went in an Old Navy TV ad several years back now, "Ya gotta get this look!"  Landscapers typically aren't that gross  by the end of a hot summer's day.

And before you ask, I've observed this particular phenomenon more than once recently in people of various genders, of various ages walking around in public.  Clearly with money to spend given the locations, context, and presence of blinking, chirping, and burping technological accoutrement.

This is not the case elsewhere.  I've spent a lot of time in Mexico during the last 20 years, a country with a vast middle and upper middle class, who have considerable money to burn judging by the stores, how people dress, what I observe in their shopping baskets, and the number of luxury cars and SUVs in parking lots everywhere.  Even the generally frumpier Germans, Scandinavians, and British, places where I have also spent time at different points during the last 30+ years, aren't far behind.  Which is to say the majority of people you encounter on the street daily look and act pretty pretty well, lad and ladette subcultures notwithstanding, even if they aren't dressed to the proverbial nines.  I've also interacted with various people hailing from elsewhere in the world, countries belonging to the so called Global South/Developing World, who present themselves reasonably well even if they come from extremely humble backgrounds.  What is the matter with us?

Enough people in the United States, members of the vast middle class, shamble aimlessly through life in the guise of dirty, crusty, torn burlap sacks, albeit with the latest model of iPhone in their hands.  One is forced to wonder, if one wonders about anything at all (my view is that most people go through life asleep), what in the hell might be wrong with U.S. society.  Something is surely amiss.  Have we really become so self-centered, entitled, and complacent that we have lost all awareness, sense of dignity, and notion of respect for others and ourselves?  Even the basics of washing one's face in the morning, putting on clean clothes, and behaving in a fairly inoffensive way seem beyond the reach of the majority, or at least of very little concern.

It's funny -- peculiar rather than ha-ha -- how dressing down to the point of appearing homeless (there is simply no other way to put it), versus a cleaner and more pulled together look, to say nothing of general conduct around and toward each other, has somehow become not only normalized but now politicized.  Dressing well and behaving in a polished way is seen as the purview of the hated elite.  Irrelevant, out of touch, and something to which average people cannot relate.  We, as a society, don't want to look more pulled together, or act more politely.  We don't want to be perceived as "jumped up," or anything else that might possibly differ from our beginnings.

Painting with broad brush strokes here, but that's certainly the impression I'm left with.  How about we buck the trend toward wallowing in the muck and mire of this way of thinking?  Wouldn't elevating ourselves -- in attitude, awareness, outlook, knowledge, world view, personal presentation, and etc. -- be preferable?  Broadening our horizons and leaving the metaphoric village behind ain't necessarily a bad thing.

Greater democracy, egalitarianism, empathy, and charity are nice ideals.  They certainly make for very handy political talking and rallying points whether, or not we manage to implement and achieve them.  But does the apparent focus by so many on the wholehearted rejection of perceived elitism and privilege, at the expense of all else, really mean that we should appear and behave like we have crawled from the gutter?

And you thought the problem was the rise of athleisure?  Look around.