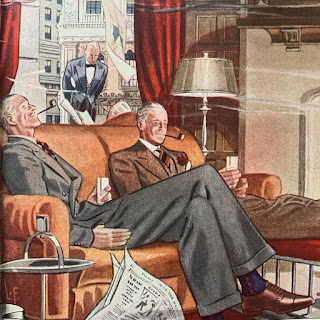 Now, THIS is how to enjoy self-isolation while waiting out Covid-19.  Presumably, there is a fire on the hearth.  My father and maternal uncle both used to smoke pipes filled with various aromatic tobaccos and, contrary to cigarettes and most cigars, it was not an altogether unpleasant secondhand experience from the vantage point of a five- or six-year-old.  Both gave up the habit before the 1970s were up however.


"You know, it's a funny old world. . ." as Bertie Wooster might have begun to Madeline Bassett during a moonlit stroll around the grounds of Totleigh Towers one evening after dinner.

And indeed, it is a funny old world when you consider how the internet works and what one can unearth inadvertently and quite unintentionally.  I liken it to tossing out the Lonely Planet or Let's Go guidebooks and simply wandering around a foreign city.  You just never know where you might end up.

Anyway, while enjoying a second mug of fresh, strong coffee this morning before getting on with the day, I stumbled across a dozen  illustrations by illustrator Laurence Fellows that I've never come across before.  Faster than you can say Augustus 'Gussie' Fink-Nottle, I downloaded them into the folder in which I collect such things on my computer desktop (I know.  I know.), and here we are.  I hope you might enjoy seeing said illustrations.

In the meantime, tinkety-tonk and toodle-pip! 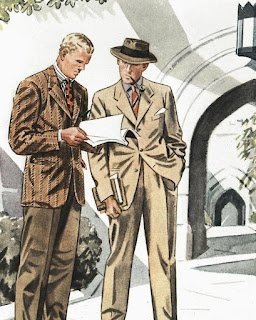 Ah, would that any male undergraduates at my state institution looked this pulled together.  Ever.  Terminal sleep-encrusted eyes, tousled hair, and food residue or crumbs around the mouth are more likely. 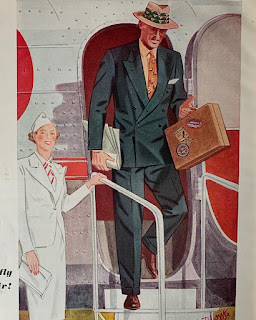 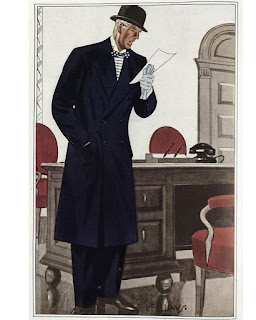 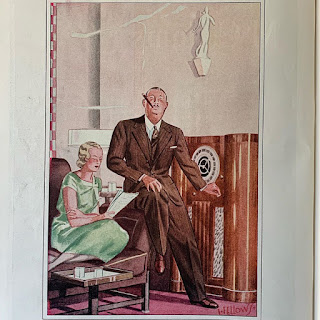 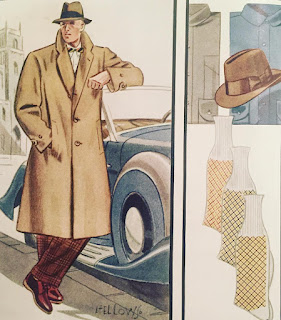 Oddly, I've never had the urge to strike this kind of pose while wearing my camel overcoat or hat(s).  Call it intuition, but somehow I feel it just wouldn't convey quite the same thing with a Subaru Outback in the picture. 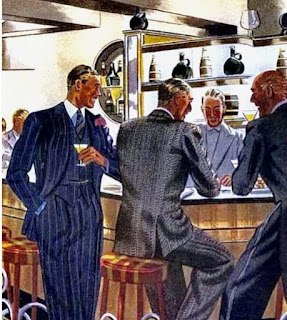 When was the last time you were in a bar where the men looked as good?  The King George Inn, on Hamilton Boulevard in the west end of Allentown, Pennsylvania -- where commuters returning from Manhattan congregated for Happy Hour along with locally-based stockbrokers, lawyers, doctors and similar professionals -- came close.  Dinners too were delightfully pleasant affairs there.  But that was 40 years ago.  Were The King George still open, I fear flip-flops, cargo shorts, visible bra straps and thongs, or ill-considered tattoos on overfed upper arms would be the norm. 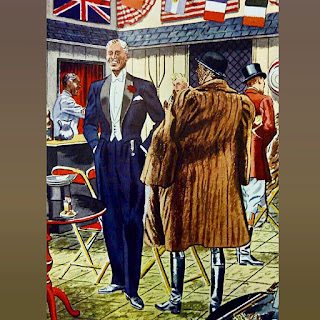 I never witnessed scenes like this when we used to attend The Devon Horse Show outside Philadelphia each spring although there were occasional top-hatted riders like the man in hunting pink in the right rear of the picture. 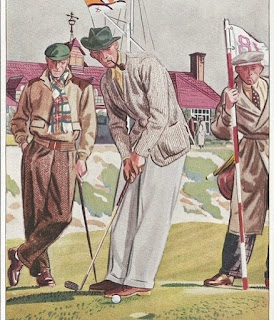 Golf has never been my thing although I've tried it a few times over the years.  Much to my social chagrin and discomfort with each well-executed slice into the rough. 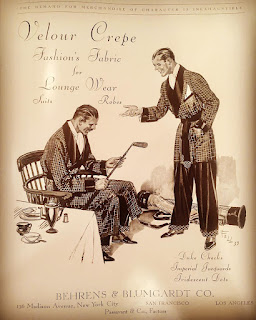 Likewise, golf clubs are the last thing I wish to discuss before breakfast.  In fact, depending on the hour, any discussion at all is a stretch.  I've really come to appreciate quiet and calm even more since becoming a parent 10 years ago. 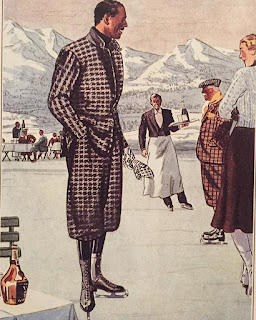 Formally attired waiters with champagne (or something stronger at day's end) would be a nice idea in cross-country ski areas though.  As yet, I've never seen it. 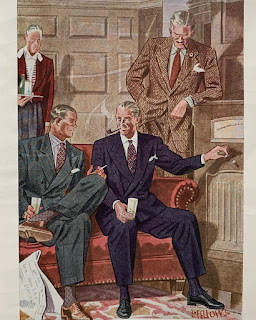 Before various international radio stations began leaving the airwaves in droves around 2010-2012, thanks to funding cuts and the relative cheapness of internet broadcasting, I was a big fan for many years of listening to news, music, and other features from all over the world via shortwave (aka world band) radio.  The large set pictured here though is rather different from my now long-gone  ICOM, Sony, and Grundig gear.