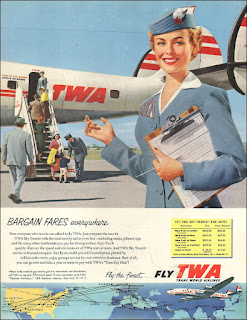 It's a fact!  Dressing better than the average schlubb when you travel by air these days gets you much more attentive, better service from the flight crew, who do not necessarily look like this on American carriers anymore.  Foreign airlines almost always have more pleasant looking, trimmer, better turned out cockpit and cabin crews in the 2000s.


Just returned from a calm, quiet week visiting ol' Mom and Step-Dad in their spacious digs just off Pinehurst #3, where they are adjacent to the green surrounding the 12th or 13th hole about 50 yards from one of their decks.  Had lots of time to catch up and become acquainted with their nine-month old yellow lab 'Daisy,' who seems to smile all the day long.  We enjoyed several very good Scrabble games in the evenings after dinner along with two of Gin Rummy and a game of Trivial Pursuit followed, invariably, by entertaining conversation about this or that until 1-2am.  A delightful week all the way around that ended all too quickly.  Back to the salt mines bright and early tomorrow (Monday).

The various flights there and back, courtesy of Delta (via Detroit) and United (via Chicago-O'Hare) were relatively fast and pleasant as far as airline travel goes in 2020.  I managed to book an itinerary that left ample time to make one connection each way without having to kill hours and hours between flights in 'the shopping mall with smelly food court' that has been the norm at most air terminals since the 1990s.

I also treated myself to First or Business Class, which is just more comfortable.  There's no getting away from that.  An interesting thing I noticed at both ends of the trip was that I was the ONLY person relatively dressed seated at the front of the planes for all four flights.  And while the flight attendants were pleasant and professional to all passengers, there was a distinct level of added attention and politeness shown to me.  It was impossible to overlook.

Very probably that was thanks to my usual travel attire (since the late 1980s): Navy blazer, tucked-in OCBD shirt, olive chinos, navy socks with subdued design, oxblood penny loafers and matching leather belt -- all well-worn and quite comfortable for sitting around once buckled into my seat -- along with a navy double-breasted wool polo coat and charcoal Borsalino fedora, which were taken from me as soon as I set foot aboard each plane and stowed in a handy closet.

On one flight in particular, the front cabin crew were so attentive that it approached fawning and was almost irritating -- almost, but not quite -- at the end of the day.  The obviously off duty military guy across the aisle from me, who amazingly resembled a wrinkled hamper of laundry (I'm not kidding) was not pleased.  You could tell.

Nevertheless, the experience I relate just goes to show how dressing a bit better than the herd still garners attentiveness and, dare I say, deference and respect from cabin crew when you travel by air.  When "You look like you come from something" (working class lad Sir Paul McCartney's own words), people tend to treat you much better than when you resemble a shambling mound dressed in whatever stretchy, synthetic, pilled, and slightly stained garments -- with designer logos splashed across the chest -- were pulled from under the bed or floor of the closet.  Think I'm exaggerating?  Look closely at your fellow travelers the next time you're in an airport or on a flight.

Returning the point at hand, as men working to improve our personal style and presentation, we should do everything within our power to make what has become an otherwise unpleasant and inconvenient experience, especially since 9/11, a bit more bearable for ourselves when we must run the gauntlet of airport security and its TSA agents to get from one point on the globe to another.  If that means bothering to tuck in a shirt, put on a sports jacket or blazer with leather shoes, and a belt, then let's do that.

Still skeptical?  The next time you fly somewhere, try going a bit dressier than usual and take note of the reaction you'll undoubtedly get from airport personnel and cabin crews everywhere.

My late maternal grandfather, an executive with a large building materials corporation out of Manhattan, did quite a bit of travel by air each week once upon a time.  That was in days before deregulation, 1978, back when expense accounts were plentiful, and air travel was still glamorous.  He flew routinely dressed in conservative suits, white shirts, neckties, and dark shoes.  And never once did I hear him utter a word about being (un-) comfortable.  Our national obsession with perceived comfort (and you thought it was constant snacking) always rears its head anytime the subject is raised about how awful the general public now looks.  "But I want to be comfortable!" goes the tired refrain.  Of course, Granddaddy's clothes actually fit him, which might have had something to do with it. 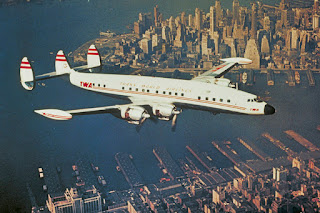 While killing time in the terminal at Raleigh-Durham at the start of my trip home last Friday, I actually spotted a current American Airlines (in subdued, small print along the fuselage) Boeing wide-body airliner sporting the old 1980s-era TWA livery.  I had to shake my head and look again.  Above is a shot of one of the most beautiful airliners of days long gone by, a Lockheed Constellation, sporting an older version of the TWA livery.  Ol' Mom flew on these a few times as a girl in the mid-50s.