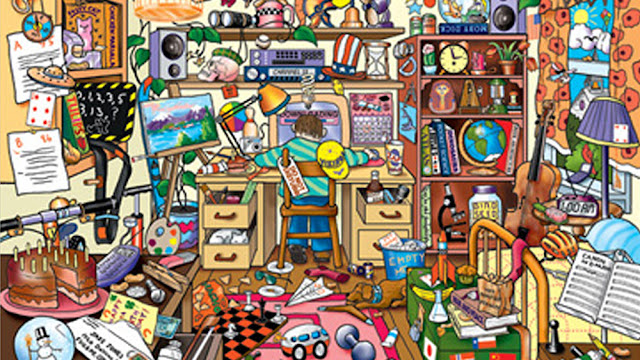 It's amazing how the interiors of so many adults' homes resemble that of a particularly sloppy teenager.
Work-related Zoom and Teams meetings in the time of Covid-19 the last ten weeks or so have provided interesting, albeit unwanted, insight into how an awful lot of families apparently live their daily lives.  In a word, clutter seems to be the rule rather than the exception.  But a cluttered living space has adverse effects contrary to what a lot of people might claim.
Now, before you protest and point out that we are not living in 'normal' circumstances, hold on a second.  Living amid mess is not a recent phenomenon by any means, but something I began to notice about 20 years ago when The Grand Duchess and I, not yet married, or parents, and still relatively carefree young academics, began to accept a lot of dinner and party invitations from work colleagues for Friday and Saturday evenings.
Almost always, I kid you not, the living spaces of most of the homes, to which we were invited, were in a state or disarray although the gatherings had been planned for some time.  That was the case whether there were any children in the picture, or not.  Whether the dwelling was a house, condominium, or apartment.  Whether the household consisted of a single, or two adults cohabiting.  It was unusual when someone's home was relatively straight.
Almost invariably, the entryway and dining areas served as dumping grounds for shoes, coats, bags of stuff, books, mail, assorted crap in those cheap plastic organizing racks (in full view) that you can buy at places like Target or K-mart, you name it.  Kitchens and living rooms weren't much better.  Stuff always seemed (and seems) to occupy every single corner, surface, and middle of sometimes expansive floors.  How can people live like that?  What gives?
It's bad enough to exist from day to day in the midst of a what is essentially a junk heap, but when you cannot even be bothered to straighten up before entertaining guests?  How hard is it to put things away when you have finished with them, hang coats and stow shoes in the hall closet by the front door, and quickly run the vacuum cleaner around any rugs or carpets every 7-10 days?  It really makes you wonder about a litany of things having to do with people, the way they think, and behave day to day.
Lest you think otherwise, I am far from being a neat nut -- I like a stack of several books in-progress and recently arrived magazines on the floor by my side of the bed for example -- but general upkeep around the house really doesn't take much time when you make a habit of it.  It's no different than making your bed, showering, and brushing you teeth every morning before you dress, or loading and running the dishwasher after dinner each evening.  Come on.  It's not that hard, people.
-- Heinz-Ulrich