A Warm April Saturday at Home. . . 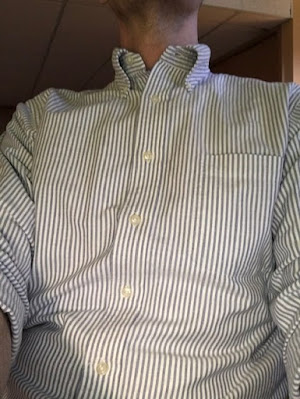 Above post-long Saturday walk and shower.  A Land's End oxford cloth button-down collar shirt from a time long ago in a galaxy far away, before the company began marketing and selling everything as  'No Iron.'   Said shirt has been in the rotation for at least 10 years, possibly longer.  And yes, that lazy mug needs a shave. 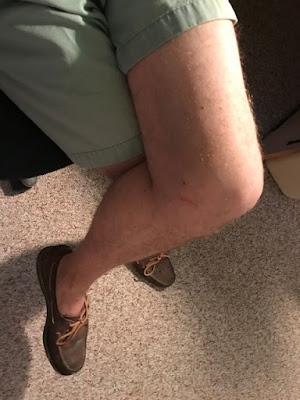 And the lower half, featuring my ever present Sebago topsiders (at least during the warmer months) and an equally well-aged pair of Land's End shorts, that over the years have faded to about the same shade of green as my long gone 1976 Volvo 244DL.  I miss that car.  Not visible is a red and navy surcingle belt with a nice brass buckle.

As I mention often enough here at Classic Style, it is entirely possible to dress comfortably, yet presentably without straying into ratty sweatpants territory.

Presentable attire need to break the bank either.  The pieces shown here were all purchased at reasonable retail prices, on sale, or seasonal clearance.  At the newest, each is several years old.

That's downright decrepit in the context of 21st century fast fashion.  Still holding up and looking pretty darn good, though, if I do say so myself.

Now, how about a G&T out on the veranda?  No?  Ok, then what about some reheated coffee left from breakfast?  Works for me.  As my late maternal grandmother used to say, "That'll take the paint off your teeth."

Down 30 pounds since last September.  Everything fits better, much of it loosely.  Minor aches and pains in the knees have gone.  I feel like the younger me again and now weigh almost what I did in 1990 at 23.  The power of (much) smaller portions at mealtimes, no second helpings, routine walking (cross-country skiing in January and February), and snacking on one hell of a lot of apples, pears, oranges, clementines, bananas, and red grapes in the meantime.

Der Alte Fritz said…
Congratulations on the shedding of pounds, quite impressive.

I’m partial to blue Oxford cloth shirts, but the 100% cotton version is a royal pain to iron ( does anyone else still use an ironing board and iron?). I prefer the 60/40 cotton/synthetic version that Arrow used to sell as they look the same, are easier to iron, and are more comfortable than all cotton Oxford cloth (especially ones that you have sent out to the cleaner for pressing - which come back stiff and starchy).

I was reading the weekend version of the Wall Street Journal yesterday and I hate to break it to you, but the no socks look is out of fashion. 😄. Maybe this only applies when worn with long trousers as admittedly socks and Topsiders paired with shorts is not a good look either. If I have to wear socks with shorts, then they need to be turned down half way and only worn with Chuck Taylor Converse sneakers.
April 11, 2021 at 8:11 AM

Charlottesville said…
All cotton, must iron shirts for me as well, Heinz-Ulrich. I find that they breathe better and drape better as well. I recently gave away a half dozen no-iron, all-cotton OCBDs after deciding that they are just not as comfortable.

Fritz - All of that being said, I do understand the appeal of easy-care fabrics. I usually send my dress shirts out, but still take out the iron when needed and would not want to iron a stack of shirts every time I do laundry.
April 12, 2021 at 6:38 AM

February 14, 2021
Yet another skiing photograph.  I know, I know.  But we have been having so much fun this winter.  I think it shows here. S kiing every other day here lately, and occasionally every day, the last few weeks.  This Valentine's Weekend, w e've hit the local groomed trails again for a few hours Saturday and again on Sunday.  In a word, glorious!   I have not skied this much since I was last in Norway 20+ years ago, clumsily learning the ropes in the Bymarka (The City Woods) outside of Trondheim.  This is an extensive series of groomed trails, much of it lighted until 10pm or so each evening, through miles and miles of pine and spruce forest that surround the city at higher elevations. In newly fallen snow, Bymarka really is like a fairyland that would take several years to explore fully.  I miss it, but we're not doing too badly here in Mid-Michigan by any stretch this winter either.  Best of all, The Young Master's skiing technique and stamina seem to grow by leaps and
Post a Comment
Read more

February 08, 2021
As above. . . So below.   Q uite cold and snowy here in Mid-Michigan the last several days, so time for a sweater between jacket and shirt.  You can just make out a solid wool necktie in dark green peeking out above the crewneck of the sweater.   Sadly (Or was it mercifully?), no students graced my Zoom office hour this morning.  Probably the same thing for Wednesday morning.  I suspect there will be a spate of last minute communications late in the week however.  That's usually the way things go.   Why, pray tell?  Their first student learning team project is due in online submission folders by late Friday evening.  I've instructed students to pose any last minute questions they might have before 3pm Friday afternoon. -- Heinz-Ulrich
Post a Comment
Read more

Attire for Wednesday Zoom Office Hours (And Then Some). . .

February 24, 2021
The upper half for today, featuring a brand spanking new shirt from J. Press.  The necktie is, of course, the Ivy Style club tie sold in a limited run several years ago.  The jacket fits better than it ever has thanks to my general slimming down since last fall.  Not much more to lose, and I'll be as skinny as I was in 1990, believe it, or not, when I was but a callow 23 year-old rocker just beginning to get with the program. And the lower half, featuring a less commonly seen pair of tan wool flannel pants/trousers.  One of two in my fall-winter rotation that I thrifted about 10 years ago now.   They looked like they had never been worn and cost just a few $US per pair, so I purchased them with the idea of varying the usual winter diet of gray flannels and dress corduroys. T he fun that comes from dressing presentably continues.  When stuff fits and feels this good, you really can put it on and forget it's there since things drape as they should without any pulling, straini
Post a Comment
Read more