A Borsalino and Blazer Tuesday. . . 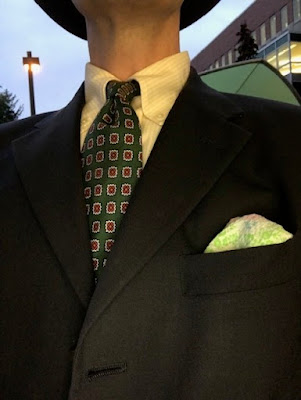 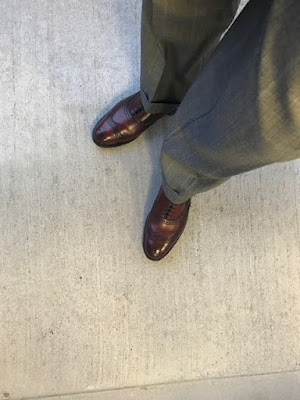 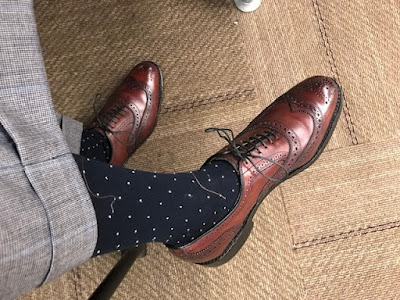 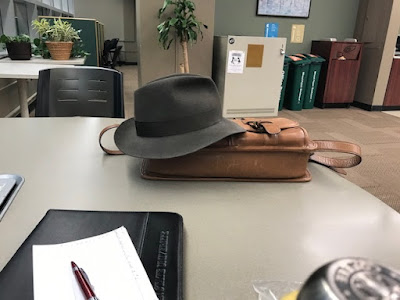 Combining items from a variety of makers and merchants today.  And having a blast in the process.

A dark, intermittently rainy day here, so time to leave the Panama hat at home and don a felt fedora instead as we move into the autumn.  I believe this particular model is the 'Alessandria.'

I own a few different hats now and wear them daily during the academic year.  The Borsalino models are softer and easier to personalize than my Optimo 'Dearborn,' a gift from my late mother when I turned 50 a few years back.  While it is a lovely hat, and people compliment it routinely with each wearing, it is stiffer than I prefer.  It's far easier to get that asymmetrical, slouchy 1940s noir look with the Borsalinos.

My late maternal grandfather wore wool fedoras and a tweed trilby into the 1970s five days a week during the cooler half of the year for his Monday through Friday commutes into midtown Manhattan to corporate headquarters, or his frequent business trips around the country.  Chicago, San Diego, San Francisco, Seattle, Minneapolis, and, oddly, Rhinelander, Wisconsin were frequent destinations.  I remember his hats well.

Once, when I was about eight, I rode with my mother from my grandparents' place in rural Berks County outside of Philadelphia to pick him up at the regional airport outside of Allentown where he had a late arrival one Friday evening about 10pm.  We spotted him from a distance standing with his suitcase and briefcase, clad in a suit and trench coat with knotted belt, and one of his fedoras, cocked to one side.

My mother, who was something of a wag in the most understated way possible, tooted the car horn to get his attention in the crowd.  We eventually pulled up to where my grandfather waited where Mom put down the electric window on the passenger side of the boat sized 1970s-era station wagon and asked him, "Hey sailor!  Do ya want a ride?"

Even at eight years old, this was terribly funny.  You  could almost hear the lonely trumpet wailing forlornly in the background.

But times and tastes change.  By 1980, my grandfather's hats almost never left the shelf in the top of the front hall closet except on the coldest December and January days.  Once he took early retirement the following year, I don't think that I ever saw him wear these hats again.  I wonder what happened to them?

By the way, I personally think fedoras look their best when worn at a jaunty angle to one side rather than pulled down hard on your head.  You can always tell in most period movies and TV shows made since men stopped wearing real hats that the male actors are not hat wearers in real life.  They never sit quite right on their heads, and the actors look too self-conscious.  What are these strange things on our heads?

Well boys, you grow used to wearing a hat by, well, wearing one.  Pretty soon, you forget all about it.

And yes.  Before anyone points it out, I've just spotted the two pieces of thread on my ankle in the sock photograph above.  Argh!  Remnants from when this pair was taken in a bit early in the summer.  Once again, I'll claim "authenticity."  After all, we don't want to look too studied in our appearance, right?