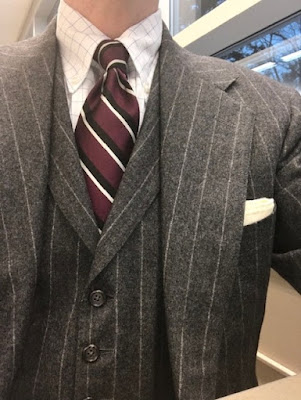 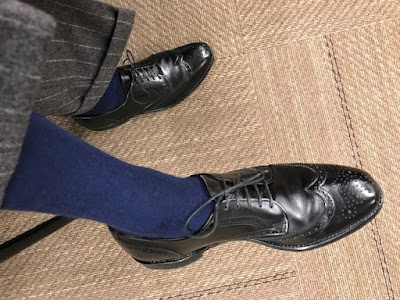 It is my considered view, which will be disputed by some, that one can never be overdressed.  Under dressed?  Darn right.  We see it all around us everyday.

However, I always make a point of complimenting students when they are really, actually, truly dressed on campus.  Usually for some kind of presentation in a business course or other.

Doesn't really matter why they are so attired though, simply that they are and, for a few hours at least, no longer resemble a shambling mound of soiled laundry with legs ambling around a shopping mall or supermarket parking lot with no greater purpose in mind than that.

Overdressed for campus?  No doubt.  But to dress down intentionally?  That is a mindset I simply cannot relate to.  Never could.  Even back in my big-haired rocker days during the heady 80s.  I dressed differently then, but I still dressed up.

And occasionally, I even put on a navy blazer, khakis, loafers, and tie when the situation called for it.  Often voluntarily.

Oddly, I don't remember being uncomfortable more than once or twice when attired thusly during my formative years.  Any perceived discomfort was usually due the inconvenience of summer temperatures and humidity like you encounter in Philadelphia, Baltimore, Washington, D.C., and Richmond where various family members lived.  Ugh!

I did not have linen and seersucker suits in the rotation then, of course, which might have helped the situation somewhat.

But for right now, we're still in the midst of  the winter, and that means wool flannel, tweed, and corduroy into early April here in Mid-Michigan.  Which is fine by me.