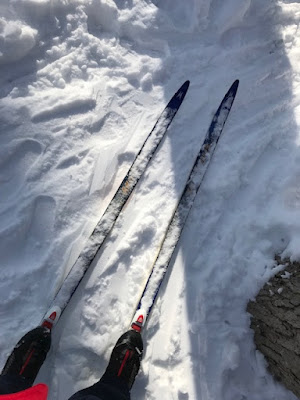 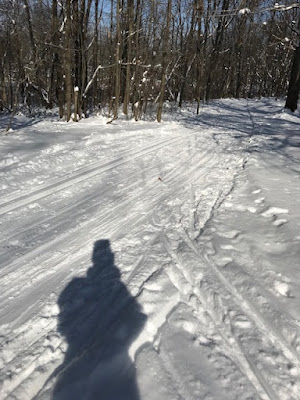 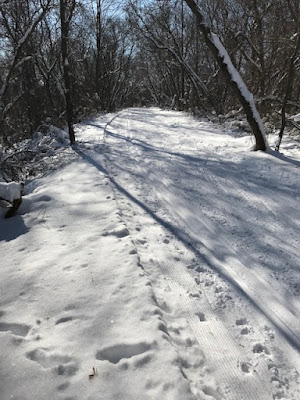 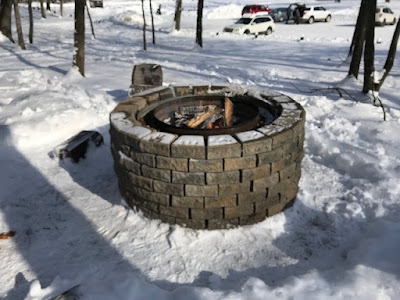 Increasingly, I am convinced that if more people in the world met on cross-country skis, more of us could get along pleasantly more of the time.

The activity exercises every major muscle group in the human body.  Next to swimming, cross-country skiing has been found to be the best for of exercise there is.  It is also something that you work to perfect continuously at your own pace, making the sport whatever you want it to be.  An easy stroll with an occasional "schoosh" down a hill, or a more grueling jaunt at speed uphill and over dale.

Today on the trails during almost four hours of skiing, I met happy and friendly groups of skiers from Germany, France, Russia, China, Japan, and India plus a couple whose language I could not quite place although the husband and I spoke in English for a few minutes at the fire pit near the rental shop and warming hut.  And even an African-American family skiing in amongst everyone else.

The five guys from India, in particular, were really fun.  I passed them several times, and while they were very clumsy new skiers, and not quite dressed right for winter sports, they were happy and having a ball out in the snow with one even filming a race down a long hill between two of his buddies with his phone.  You could not help but smile and offer words of encouragement as the one careened down the track on the left to the bottom, managing to remain upright all the way, while his friend wiped out a quarter of the way down on the right.

Happiness and fun are infectious.  They cannot help but make others feel equally good.  And it is certainly nice to observe in others as you go about your day.

Years ago, one of my Norwegian roommates in Trondheim, a very funny guy named Magnus, advised that you must always say a friendly hello to people you meet on the ski trails.  Probably one of the best pieces of advice he gave me during our time living together, and a habit I have cultivated ever since.

A friendly hello almost never fails to elicit a kind greeting in response and maybe a brief chat as you glide by one another, or stop to catch your breath and take a drink from the water bottle before each continuing on your respective ways.

Imagine if we could get European, American, Russian, and Ukrainian leaders skiing together on the trail somewhere.  It could diffuse the currently tense situation in the Ukraine.