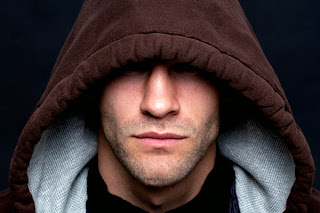 Time to leave behind the layered hoodie look, guys.  It makes you appear creepy, common, and suggests to many people, right or wrong, that you're looking for trouble.
Colder weather is on the way in much of the Northern Hemisphere, so it's time for average guys kick up their everyday style with a piece or two of classic outerwear.  Try items like these:  trench coats, tweed overcoats, duffel coats, and the more casual pea coat.  Here are a few examples of what we're talking about. 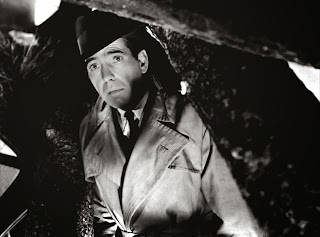 
The first stylish cold weather overcoat to consider is the classic trench coat, like the kind sold by London Fog, Burberry, et al, which can also double as a raincoat when treated with water repellent.  These coats seem to be plentiful in most thrift and charity shops in a variety of colors and sizes.  Make sure, though, that the one you purchase has its liner, making it functional as a cold weather garment too rather than simply a shell you toss on over your clothes on a warm drizzly morning before heading out of the house.  My own trench coat has served me admirably for over 14 years in a variety of situations.  I even slept under it for a couple of nights until the rest of my baggage caught up with me when I moved to Norway in August of 1999.  In the business districts of major cities, you'll still see lots of men and women wearing this kind of overcoat on wet, blustery days. 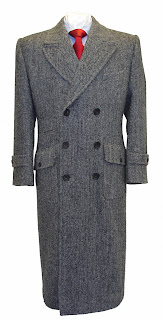 One example of a tweed overcoat.


Less common are warm and hard-wearing tweed overcoats like the one above.  These look amazing once the weather turns cold, and they certainly stand out in today's sea of cheap technicolor garments that have been inspired by downhill skiing as well as the sloppy hooded sweatshirt worn underneath another jacket look that seems to be everywhere now.  Why set out to look like you're on the way to slop the hogs and milk the cows at 4am or at a construction site unless you are actually working on a farm or a construction site?  It's beyond me.  Anyway, when purchased new, tweed overcoats are frightfully expensive, but they can often be had for a song at thrift and charity shops or via online outlets like Ebay.  I found mine, in brown and cream, through the latter for just US$20 a couple of years ago during the summer. 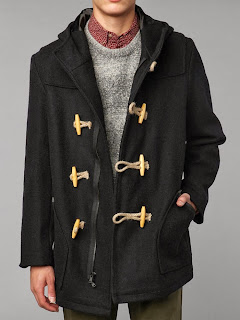 Long considered a preppy and a mod staple, here's one laid back way to wear a duffel coat.


More casual is the third possible cold weather option, a duffel coat like the one pictured above.  These look great over a blazer during the week, or when worn layered over a sweater and button-down collar shirt during the weekends.  Once more, you don't see too many coats like this in 2013, at least not in my neck of the woods.  Like the tweed overcoat, it's easy to drop a bundle on a new duffel coat but don't despair.  They do occasionally turn up in thrift and charity shops or on Ebay for reasonable prices.  I spotted a man's version by Pendleton, for example, in my best thrifting spot several weeks ago for just US$29.  Someone wisely snapped it up before my next visit a week later.  My own, in a very dark green, was acquired via Ebay for a similar price last January.  Were I still living in Minnesota, it's the coat I'd wear from November through mid-April each year.  In my current part of the United States, though, it's not always cold enough in the winter to make a heavy duffel coat practical for everyday use however. 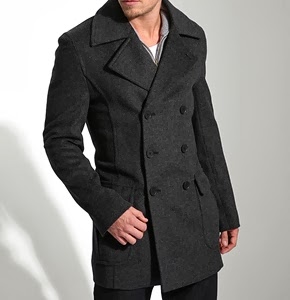 Whether it's worn on the deck of a ship, or a walk through the local park to a favorite cafe on the far side, a pea coat is one more extremely stylish way to combat the cold.


Next, we have the pea coat.  Like the duffel coat, it too comes to us from the types of coats worn by sailors and navy men on deck in cold, stormy regions like the North Atlantic and North Sea.  Pea coats offer a very stylish, yet casual alternative to much of the usual cold weather gear we see sported by the more clueless men-children among us.  I lack this kind of coat in my own wardrobe, but am keeping my eyes open for something similar if and when it presents itself.  Over a crew-neck sweater, jeans, and loafers or desert boots, it helps make for a great weekend ensemble.  You'd certainly stand head and shoulders above most of the other men you'll encounter on a Saturday or Sunday in town, who are invariably dressed in frumpy relaxed fit jeans, white sneakers, and pilled fleece pull-overs. 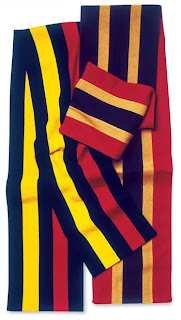 Distinctly colorful, stylish, and warm school scarves, yet another way to kick up your cold weather style this, and every, winter.


Finally, be sure to add a extra bit of dash to your cold weather outerwear, and keep your neck warm too, with just the right kind of wool scarf, either in school or regimental colors, similar to those pictured above.  My own such scarf, about 20 years old now, is once of the color patterns associated with University College Dublin, which used to be sold by the originl J. Peterman Company (before it went belly-up some years ago) here in the United States.  I used to have another scarf, many years ago, that featured the regimental stripe of the Argyll and Sutherland Highland Regiment.  Sadly, 'African Drum Moths' (remind me to tell the story sometime if you're really interested) found it one summer and ate it to pieces.  Fortunately, good, ol' Mom presented me with a new scarf the following birthday.

A word of caution here with woolen scarves associated with colleges, universities, and military bodies.  If you are not actually affiliated in some way with an academic or military institution, and you find yourself in the United Kingdom or Commonwealth countries where there is wider recognition and considerable meaning attached to these items, it's probably best NOT to wear the garment or accessory in question for the duration of your stay.  Save it if for another time.  It's akin to misidentifying yourself as a former member of the United States Marine Corps, for example, with a particular piece of clothing or accessory.  Definitely not a something that is in good taste.  So, to avoid related awkward situations, it's best to exercise a bit of sartorial restraint here, depending on where you are.

As you can see, there are a number of ways for an average guy to kick up his cold weather style quite a bit without dragging out that puffy downhill skiing coat with the lift tickets from the slopes around Killington, Vermont or Jackson Hole, Wyoming still ostentatiously attached to the zipper pull.  Neither do you have to schlep around like a shambling mound in an over-sized hooded sweatshirt worn beneath an old windbreaker or ratty lined plaid flannel shirt.  I'm reminded of an interview with Paul McCartney, a man of pretty humble origins, that I read somewhere a dozen years or so ago.  At some point in that piece, he mentioned that, as a teenager, it finally dawned on him how important it is to look like you are and come from something.  While clothing is certainly not the only way to do this, it is nevertheless an important part of how we present ourselves to the world. . .  and those closest to us.