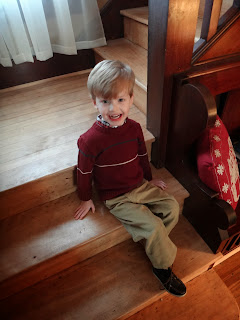 Just because they are children does not mean young boys should go through the first five year of life dressed in nothing but Sponge Bob or Spiderman items, junior versions of bagged out t-shirts, sweat-, or cargo pants, or any permutation of what has become recognized and known in some quarters as thugwear.  Hopefully, we aren't raising them to resemble little meth heads, petty criminals, or various other types -- and there are many -- who look like they've fallen through the cracks of society.  Or they are about to.

Nope.  Let's stop kidding ourselves.  Appearance most definitely is important for a host of reasons, personal and societal.  Get boys used to dressing nicely as soon as possible, and they might, just might, turn into teenagers and adults who realize the need for and advantages offered by dressing several cuts above what has become the accepted, sad, and pathetic norm.  As parents, shouldn't we foster certain habits and ways of being in our children that exceed the average and commonplace?

Clothing, the way it helps us to think of and feel about ourselves, as well as the language it speaks to others, certainly falls in line with that.  And, aided by thrifting, watching for sales, and birthday or Christmas gifts, it is entirely possible to produce young people who feel comfortable in clothes that feature things like actual waists, collars, zippers, buttons, shoelaces, and sleeves.  And not a speck of camouflage, hunter's orange, athletic nylon warm-up wear, or over-sized and overpriced athletic footwear in sight.  Perish the thought.