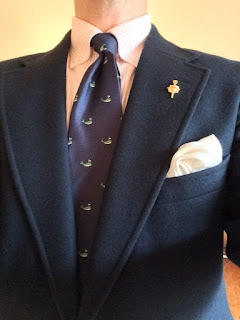 Here's how the upper half looked this morning.  A Polo University Club wool flannel blazer (thrifted about five summers ago) worn over a pink and white University Stripe OCBD shirt with an old Land's End necktie that I purchased about 10 years ago.  I added my PKP pin when I realized that the person I was to meet today needed some way to recognize me.  It worked. 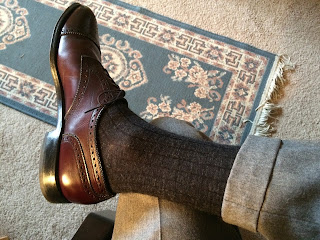 And here's the bottom half.  Yet another pair of gray flannel pants, charcoal Merino wool dress socks, and a pair of Allen Edmonds cap toe oxfords.  Very supple shoes that I could easily wear all day.  If more guys were aware of how comfortable good quality leather dress shoes can be, the bottom would soon drop out of the athletic shoe industry.  Call it a hunch. 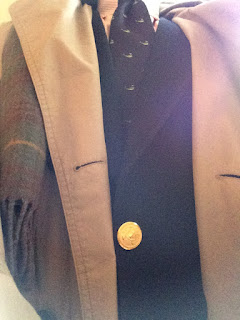 And the same shown here beneath my trusty old London Fog trenchcoat, purchased new during the summer of '99 before I left for Norway, along with a wool scarf that Mom and Step Dad gave me one Christmas over 20 years ago.  The coat is a bit worn in places now and no longer repels moisture quite as well as it once did, but when clean and pressed, it is extremely comfortable and still looks good I think.

A cold one here today with bits of snow and ice coming down from the sky occasionally.  A good reason to hunker down and remain inside since I normally have no commitments on campus during Fridays this semester.  However, I had a meeting scheduled with head honcho on the executive committee of the local Phi Kappa Phi chapter about the possibility of serving in some way, shape, or form.  So, time to shower, shave, and pull myself together after shuttling the Young Master through his own morning routine and getting him to the school bus.

Must admit, that I felt pretty good leaving the door and heading to the car considering that it was still so darn early.  And do you know?  It was the oddest thing.  Lots of people, from the desk clerk at the Kellogg Center check-in desk in the lobby, to the greeter at the State Room restaurant, to random people I met on the elevators greeted me very politely and/or provided the requested assistance with a smile.  Same thing when I stopped to pick up a few things afterwards at the supermarket on my way home.

The argument might be made that what I point out here simply comes from good customer service training in both cases.  And that may very well be.  However, I have found many, many times that people tend to react to and treat you differently -- better -- when you DO NOT look like you've spent several days living beneath Oscar the Grouch's garbage can.  Just my opinion, of course, which makes that observation very easy to dismiss for many people, but I nevertheless think there is something to it.

I certainly remember how people reacted to and treated me when I wore nothing but tight jeans and t-shirts as a young long-haired rocker back in the 1980s and early 90s. . .  despite everything my family tried to tell me and instill during those early years, and before I understood fully what they meant.  Then, the other penny finally dropped about 1995, and I could not help but notice how things changed -- markedly -- once I decided to have my hair cut short and begin dressing better as I wrapped up my undergraduate work and continued with graduate school.

Appearance matters.  Like so much else in life, I guess, people either get it, or they don't.