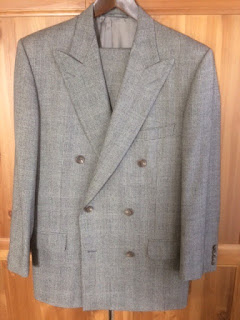 No, not a new suit, but new buttons!

As the old song by Meatloaf went, two out of three ain't bad on this Tuesday before the Thanksgiving holiday here in the United States.  First, the two. . .

I picked up the above suit from my tailor's on the way home from campus this morning, where he had sewn on new buttons to replace to the original, truly awful solid tan buttons that came on the suit when I purchased it some years ago.  It looks like a different item!  I've always liked enjoyed the suit, but the better buttons take things to a whole new level.

Next, I dropped by the bank to deposit an actual check (remember those?).  Not one, but two of the 20-something male tellers, one who was the greeter, and another who actually helped me from behind the counter, had on full suits with neckties and leather dress shoes!  You could have knocked me over with a feather.  I can't recall the last time I observed male bank employees, who were not the branch manager, in actual suits.  The early 1990s?  We'll forget that one guy wore bright tan shoes with his charcoal suit, and the other guy wore a black suit, and simply marvel at the fact that they were trying to up their style game.  Well done late millennial males!

I complimented them both as I concluded my business and prepared to leave, asking if their attire reflected a change in corporate policy.  The greeter smiled, thanked me, and simply replied, "No, this is what we do."  Clearly, there are two more people out there who get it.

Sadly, the run of good fortune ended there.  A stop at the barbershop, which is closed on Mondays, revealed that everyone else besides me had the same idea about a pre-holiday trim.  I didn't feel like waiting for the five men in front of me before I could take my place in one of the three chairs.  I'll try again after the holiday next Tuesday.  Maybe I'll have better luck then?
Last of all, a quick check of my voicemail once I arrived home resulted in learning that an approaching dentist appointment for November 30th needed rescheduling thanks to a new computer system due to be installed at the dental practice on that day, which means they cannot see any patients because. . . everything is now computerized.  No paper records or appointment book.

Normally, I wouldn't mind so much, but this particular dentists' office already changed the same appointment on me once at the end of September, pushing things back by two months before they had an available opening I could actually make.  It was also difficult to get the appointment set up in the first place when I initially made it back in July.  Sigh.  As the song went, two out of three. . .   And yes.  I realize my math is off, but it's the spirit of the thing you understand.