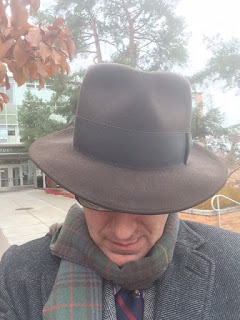 'The Dearborn' fedora by Optimo Hats of Chicago yesterday (Monday).  The hat was a birthday gift to myself in 2017.  It finally arrived on December 23rd, two months or so after I placed the order (the lady who helped me on the phone was extremely helpful), and during the cooler months I wear it on average two or three days each week before brushing it and putting it away for the season in its hatbox round about mid-April.  It hasn't yet developed that wonderful wavy slouch of Bogart's brim in all of those old films noir from the 1940s, but we're getting there.  There is actually quite a bit more 'dip' to the brim than is apparent in this photo, and it helps of course to wear the hat at a jaunty angle rather than pulled down onto one's head evenly.  Attitude, my friends.  Attitude. 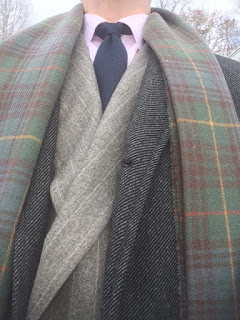 The upper half today, featuring a Polo Ralph Lauren double-breasted wool flannel number.  I've got several of these suits, all of which are soft and warm on cold days like today with that wonderful 1930s silhouette.  Old-fashioned?  Yes.  Anachronistic?  But of course, and you know what?  I don't mind in the least. 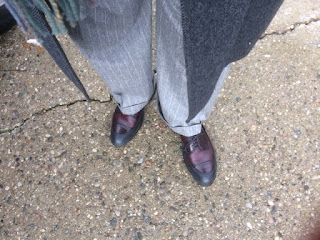 And the lower half.  Pardon the galoshes, but we began the day with two inches or so of new snow on the ground and cars.  It's not laying on the roads and streets yet, but it won't be long.  Time to wax up those cross-country (Nordic) skis and lean 'em up by the back door!

A trying hour this morning with a student who came to my office to wrangle for a higher grade. . .  other than the one she earned six weeks or so ago on an earlier project.  I can't quite remember a time when a student has worked so hard to butter me up before resorting to the waterworks, which went away as quickly as they came once she figured out it would not have the desired effect.  Ahem.  It was a relief to lock up my office, pull on my overcoat, and head across campus through the flurries of snow for my Film Noir course.

The student learning teams in this particular course have been leading discussion for two or three weeks now and doing reasonably well with that.  Today's team, besides putting together a discussion that was clearly well planned and organized,  look extremely pulled together and polished.  I routinely ask student learning teams to follow business (smart) casual guidelines in the assignment prompt packet, and provide a current visual guide stressing that they are the focus of the room for the day, this is good practice for real life once they enter the working world, and people are much more likely to hush up and listen up if the people at the head of room look like they know what they are doing.

Most student learning teams do reasonably well with dressing up, in a business casual sense, although a few don't quite understand that ripped jeans and/or sweatpants aren't what is meant by business (smart) casual.

In any case, today's team, three young women and a young man, looked great.  The young man, in particular, appeared like he belonged to the first half of 1960s when the ivy style of dress was at its height: light blue oxford cloth button down shirt tucked in, repp stripe necktie, pressed khakis that had actually been hemmed to fit his inseam without puddling around his ankles, a navy blazer featuring sleeves at the correct length, with matching black belt and polished shoes.  Clearly someone gets it, and equally clearly this is gear already in his wardrobe.  My suspicion is that Mom and Dad also get it and have taught the young man in question, either implicitly or explicitly, how to dress.  Nice to see.

Lest you think it's all about appearances, the content and conduct of their talk and related discussion was absolutely solid.  One of the best I've seen so far this fall.  Interesting and thoughtful questions that got the class thinking and talking about their ideas, considerable analysis of specific scenes from two films -- Kiss of Death (1947) and D.O.A. (1950) -- As well as the team's own observations plus some more general information about aspects of each film. Each of the four team members had a specific function, and each of the four took turns leading the class.  This is how it's done.  It was a a delightfully well-executed hour or so, made even more pleasant by the way in which the team of four undergraduates presented themselves visually.

The lesson here is not that appearances are the most important thing, or that they are a viable substitute for meaningful content, but looking pulled together, competent, and prepared to lead should never be underestimated.  Broadly speaking, we've painted ourselves into a difficult corner with the rise of 'slob nation' and the related ridiculous notion that it somehow no longer matters how we attire ourselves for public consumption.  I suspect, however, that I am preaching to the choir.