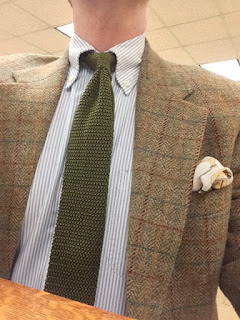 Another Harris Tweed jacket on the top half for today, a rainy, windy, and chilly one here in Mid-Michigan. 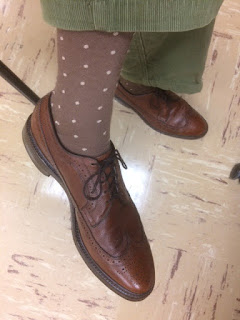 And the bottom half, featuring the familiar pair of Allen Edmonds longwings, which have been treated with Saphir Renovateur and Saphir neutral 'High Gloss' on the toes and heels since they last appeared here.

The Young Master, whose school is closed today since it is a designated polling station, and I stopped by our local polling station on the way home a little while ago, so I could do my civic duty and cast my vote in the midterm elections here in The United States.  While very well behaved and patient, since he had already voted once today with his mother, our blonde, freckled nine-year-old was a hit with the various retired ladies and gentlemen in charge of the voting station, introducing me to each one in turn as "The Mean Father."  Even funnier was when he told one pair of women who took my photo ID and application to vote that he would be a mean father some day too.  A very funny boy.  I wonder where he gets it?