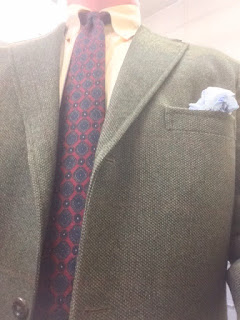 Above, featuring a vintage wool challis necktie hand blocked in England.  I found this several years back for a couple of dollars in one of my three old thrift/charity haunts in Central Illinois before we decamped for Michigan in June 2015.  The shirt is a Land's End Original Oxford, purchased way back in 2003 or '04 when the company still sold mostly 'must iron' shirts.  The pocket square is a silk number from Put This On and features flowers in mid- and light blue that look more like snowflakes to me, so it seemed fun to add it to the pocket of today's suit before I ventured out the door and into the cold early this morning. 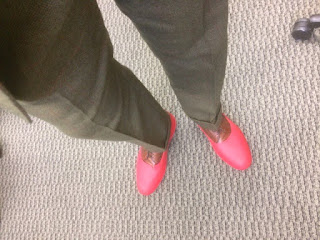 And the bottom half, featuring red SWIMS overshoes atop the usual Allen Edmonds long-wing brogues.  Not visible are the gray Fair Isle socks from Dapper Classics and the braces I wore with today's suit in lieu of a belt.


Quite cold with about 5 inches of crunchy snow underfoot here in Mid-Michigan, which made it an ideal day to trot out this tweed suit by Chipp for the first time this season.  It is easily the heaviest suit I own, and it absolutely must be cold outside before I can wear it comfortably.  I topped everything off with a tweed overcoat, a long maroon and white wool scarf, and some green fleece gloves from REI, which were given to me by the Grand Duchess for Christmas four or five years ago.  I'm sure I look bizarre to most whose paths I cross, but ah well.  If I can give a few people something to laugh about, so much the better.  To me, that is far preferable than simply blending into the crowd.