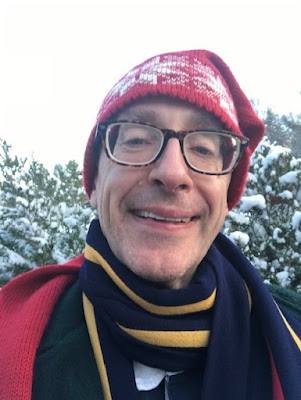 Yours truly at the conclusion of an hour-long walk around the snowy neighborhood late yesterday afternoon following gingerbread cooking baking and helping The Young Master wrap gifts for his mother.

Attire visible in the selfie above features a heavy green vintage wool duffel coat that I've had for about a dozen years, a wool  Peterman University College-Dublin scarf given to me for Christmas by ol' Mom about 25 years ago, and a four foot long wool stocking cap that I purchased in Norway in February 2000 while attending a winter carnival with friends in Røros, Norway.

An old mining town right along the Swedish border, I have never been as cold as that day there.  And we were dressed for the weather believe it, or not.  Or so we thought.

My Norwegian roommates Geir and Magnus always used to say that the cold and snow along the coast in Trondheim were nothing compared to where they had done their military service year, north of The Arctic Circle, prior to enrolling in university where we later met.

And they weren't kidding.  Our layers of wool and boots were not much help against the cold that day in Røros.  Temperatures according to the thermometers everywhere never climbed above 0 degrees Fahrenheit.  Not unlike winters in Minnesota where I lived for several years, and met The Grand Duchess, after returning to the U.S. from Norway.

Our pace at the winter carnival that day was slow as we made our way around the various stalls selling crafts, foods, and other items.  Not unlike German Christmas markets for a point of reference.  One of our party was visiting from The Philipines and had a, let's say, slower gait than the rest of us, which made keeping warm through motion difficult.

The trick we quickly figured out was animal fur.  All of the locals were, besides being huge viking types with red and blonde hair, were dressed head to toe in furs.  I won't get into an argument about the ethics of that, but doing so certainly seemed to keep the wearers warm and happy as they enjoyed the winter air and snow.

"Hearty" was the word one of out party used to describe the people around us.  Essentially vikings with Nokia cell phones.

We, on the other hand, made out as well as we could in our woolens.  Somewhere there is a photograph of yours truly and one of my friends sitting before a roaring fire in a bookstore with our feet up on the hearth imbibing some warming drink or other that contained alcohol.

A beautiful day and cultural experience for our mixed Norwegian-American-Filipino group, but bloody cold.  And I say that, remember, as a winter sports enthusiast.  Five or six hours would have been long enough that day back in February 2000.  But we were there for about ten hours.  Brrrr!

Needless to say, it took a long time to warm up again on the bus back to Trondheim that evening.