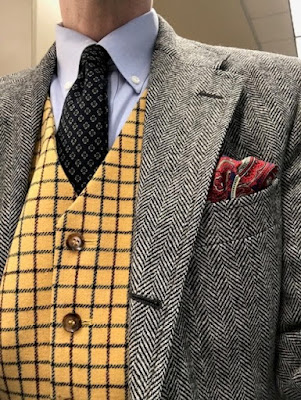 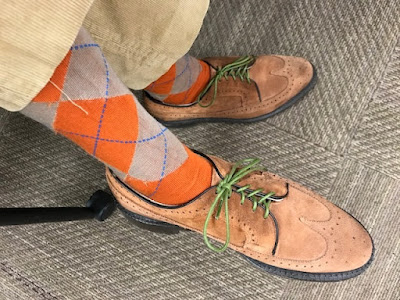 The simple swapping in and out of shoes and accessories can produce a host of different looks that are nevertheless beneath the same umbrella.  Doing my best Tuppy Glossup here today with the addition of a bold wool vest given to my by The Grand Duchess last Christmas, some equally bold wool socks, and a rather festive silk pocket square -- for December 1st -- that I've had for about 15 or 16 years.

The wool tie is an old favorite that, thrifted 1o or so years ago.  The suede brogues are by Allen Edmonds made for sale in Nordstrom department stores, but I snagged them very cheaply on Ebay in late 2015 just before we moved (Yet again!  Twice in six months that year.) from an apartment into Totleigh-in-the-Wold in early December that year.

Gotta wear 'em now before the snow starts piling up when L.L. Bean duck shoes and boots become the default footwear of choice.