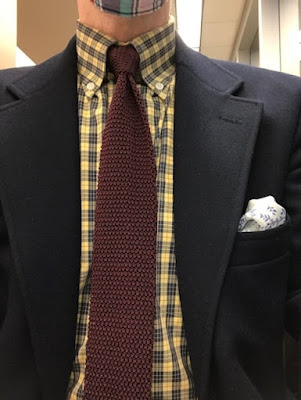 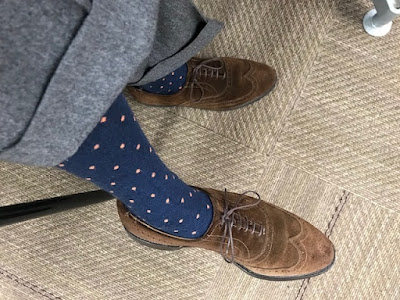 I cannot recall when I have ever enjoyed my attire like I have the last several months since the Fall 2021 semester kicked off at the start of September.  Almost 18 months stuck at home will do that I suppose.

While the foundational items have been seen here before, the shirt is new, or rather it has not appeared in a long, long time with any combination of navy blazer and pants.  I purchased it as one of several new shirts from Land's End during early fall 2004 in my first teaching job after graduate school when I added to and expanded what was a very basic professional wardrobe.

Although you don't necessarily need a huge amount of clothing to present yourself well, at some point you do want more than just a couple of sports jackets and two or three dress shirts.  In any case, the shirt pictured above sees the light of day infrequently these days.  But it is fun to trot out now and then and works well with the knitted silk necktie selected for today.

The chocolate suede belt and shoes made one last appearance for the season.  Sooner, or later, we'll have too much snow and ice on the ground, and winter footwear will be called for as I mentioned yesterday.  Right now, it's sort of the footwear equivalent of smoke 'em if you've got 'em.

Tomorrow (Friday) is a relatively easy day with just three meetings scheduled.  Meetings I am actually looking forward to, so make a mark on the wall.  While I could easily do them from home via Zoom, I am toying with the idea of heading into campus early in the morning simply to have the excuse to dress for work again.  I know, I know.  I am a vain so and so!

However, the nicest part of the midday was when The Grand Duchess joined me in the library with her briefcase and laptop.  For about an hour, we worked across the table from each other like we did as grad students 20+ years ago.  I had forgotten how nice that was.